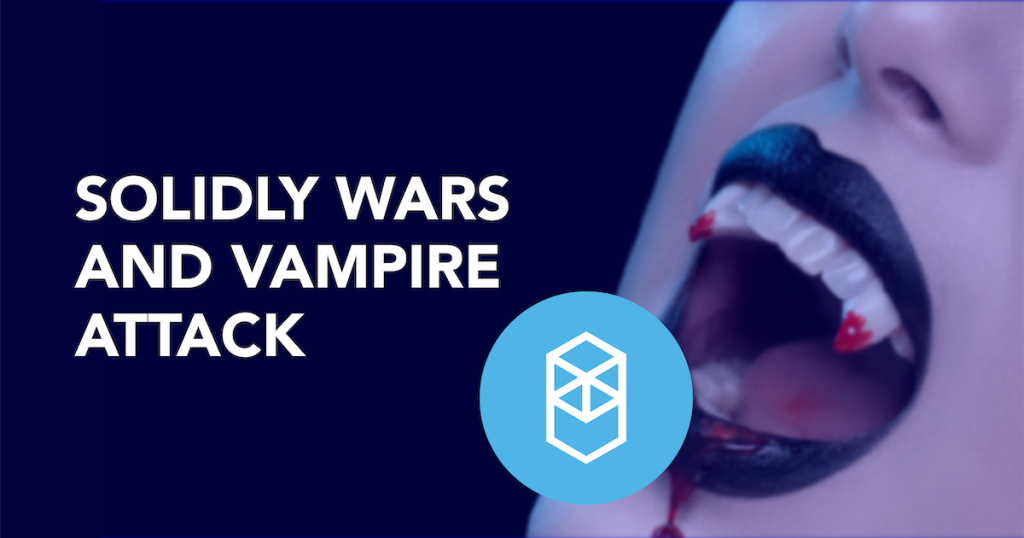 A whole lot of wars have been emerging recently, a battle for both emissions and voting rights on various DeFi platforms.

This concept first originated from the Curve Wars, and has since developed into the Saber Wars, Platypus Wars, and more recently the Solidly Wars.

Also Read: Understanding The Curve ($CRV) Wars and What It Means For The Curve Ecosystem

What’s so exciting and intriguing about Solidly Wars? It is similar to Curve Wars, but with an intensity of 10x.

Before Solidly was even launched, the war for TVL was ongoing, but this lead to the TVL skyrocketing to US$12 billion. Let’s take a look at what you should know about the latest developments.

What is a Vampire Attack?

A Vampire Attack in crypto is a method where one protocol offers betters rates than another protocol, stealing their customers and investors. Vampire Attacks source liquidity by siphoning it from one or several competing projects. This is a controversial bootstrapping strategy that has proven to be interesting.

A Vampire Attack aims to gain three things from other protocols. These include, liquidity, users, and trading volume. Stealing both money and users results in creating large trading volumes, which is important because that means high fees which are rewards for investors.

Vampire Attacks can also come in a variety of forms, these include the following:

In an interesting context, a Vampire Attack can also take place before emissions. One such example is the war for TVL in the Solidly Wars. One of the major issues is that many new protocols simply develop just to get enough TVL to be in the top 20. While this does get degens excited, it discriminates the smaller protocols on Fantom.

One such example is 0XDAO. The sole purpose of creating this was to obtain the NFT, and they managed to achieve 3 billion TVL thanks to the insane APRs promised.

It capitalized on other protocols’ liquidity, and sapped the TVL of these protocols. They did this by offering the following rates:

While farmers benefit from extreme farming rates, protocols created for this short term purpose rarely have ideas or even the resources to decide how and what to do with the NFT.

They generally wouldn’t be certain how to distribute emissions, how to fractionalize it, how to split between pools, etc. Thus, Vampire Attacks are a double-edged sword.

In a nutshell, there are two main competitors, Solidex and 0xDAO. There are many other competitors but those are smaller protocols who do not have a significant impact. Long story short, every competitor looks to mobilize the emissions of Solidly.

The first thing you need to know is the rate of emissions. This is an important concept as Solidly emissions utilizes a ve(3,3) model with a unique twist of perpetual non-dilution which providers some very interested DeFi game theory.

In simple terms, this basically means that once you lock your $SOLID tokens, your % ownership of the protocol cannot be diluted. This concept is quite similar to OHM and BTRFLY but solves to OHM betrayal loop preventing a downfall like TIME.

Solidex is a large protocol combining the NFTs of its SEX partners and is hence able to bootstrap a lot of liquidity. Their SEX partners, which include Multichain, Geist, Curve, Ren, yearn, veDAO, saddle, and ABRACADABRA, deposited their NFTs to concentrate emissions of Solidly.

On the flip side, 0Xdao is a single protocol but with a huge allocation thanks to its massive US$3 billion TVL before the snapshot for the top 20 TVL protocols on Fantom. Both protocols are competing to be the $CVX of Fantom.

Interestingly, it can be seen that 0xDAO has the highest emission rate of 11.88% (to have partners soon), but Solidex is made up of combined emission rates from many protocols.

When you offer liquidity on Solidly, you acquire Liquidity Pool tokens representing just about every form in a pool. These tokens can then be deposited into Solidex.

Stable pools are liquidity pools made up of similarly behaving assets like stablecoins (pegged to the US dollar) e.g., USDC, DAI, MIM, FRAX.

The like-asset approach is not limited to stablecoins, tokenized or wrapped versions of Bitcoin also make up a stable pool, as they are stable to each other.

Variable pools are pools with volatile currency pairings. This is not recommended for newbies as you can suffer large impermanent loss. Please read about impermanent loss before making your investment decisions.

For advanced traders, this is a perfect environment as they can arbitrage opportunities thanks to volatility and slippage allowing them to profit largely by entering and exiting at the right time. Users who attempt to do this should also be familiar with the pool composition ratio.

Lastly, the terminology is also important. Solid is normal SOLID. veSOLID is the same as SOLIDsex and is essentially a locked version of SOLID. veSOLID is the tokenized version of SOLIDsex. SEX is the protocols main coin which entitles users to a share of the protocol and voting rights when locked. Both veSOLID and SEX have different purposes and staking SOLIDsex (veSOLID) entities users to boosted emissions.

This is done via the boost mechanism, which is controlled by Solidly, which requires one to lock their SOLID into veSOLID and in Solidex case, SOLIDsex, in order to receive a boosted APR for the Liquidity Pool. In Solidex, the protocol pools all of this in the form of SOLIDsex, enabling the protocol to get a global boost which is enjoyed by the liquidity pools staked with Solidex.

In return, the Liquidity Pools must give a performance fee of 15% of Solid rewards to SOLIDsex stakers. To reach a maximum boost of 2.5x, the protocol needs to own a lot more veSOLID or SOLIDsex.

On the other hand, SEX (protocols main token) enables the following benefits:

0xDAO originally was born with the goal of attacking veDAO vampires. It has since spiraled, (and soon to be) attacking on the liquidity of Solidex. Unlike Solidex, 0xDAO inquiries customers to offer liquidity on its platform, then deliver the liquidity to compete with Optimized on Solidly.

In addition, as a substitute of prompting to work veSOLID (locked SOLID) 0xDAO calls consumers to stake Strong, and will return a representation token of 0xSOLID. Interestingly, it is similar to Solidex but users can an addition component of the OXD (0xDAO administrative token)In recent developments, 0xDAO has managed to bootstrap liquidity with several partners but more information is yet to come out on this soon.

With Solidly Wars, there are many important facts to look at. The main thing all users should consider is liquidity. This is a merchandise on Fantom and the liquidity is not ideal now. This means that price slippage is not ideal right now, and slippage can even occur with Stablecoins.

Another interesting point to consider in this war is that 0xDAO has harness liquidity like Solidex with its new partners of SpookySwap, SCREAM, Reaper Farm, Beethover X, Liquid Driver, and Tarot. This makes up a combined power of 32.64%. Solidex has only a slight marginal lead at 33.74% and that means any NFT holders that join either team will tip the balance. This is an ongoing development and will be very interesting to watch.

Interestingly, their was an error in the merchandise code of Solidex which did result in some pools not acquiring votes, and hence not accruing rewards. Many people expect this project to grow incredibly fast and take Fantom to the next level. It still remains a mystery as to whether Conje’s project will succeed currently with ongoing developments.