Cardano Holders Will Probably Outperform You 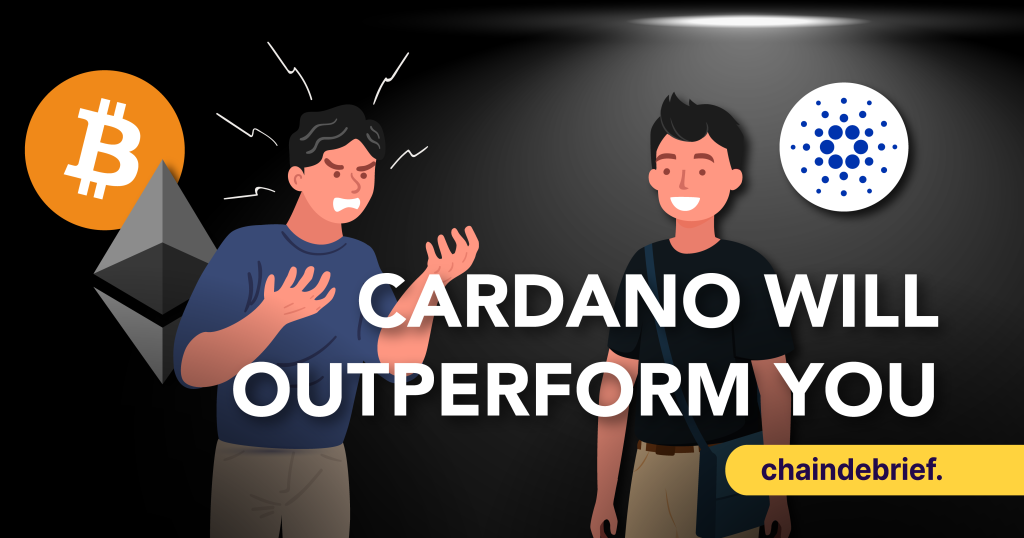 Crypto, for better or worse, has birthed the perennial IQ curve meme.

The meme denotes the general population of market participants, and here is my personal take on it:

I, by no means, think I am anywhere near the right curve denomination, and therefore need other ways to make it. As I refuse to exit the crypto markets before my grand 1000x, let’s do some thought exercises.

The Future of Casinos Finance

Unlike sophisticated equity funds, our strongest thought leaders play on memes and narratives to drive price action, and it’s not for a lack of trying.

If you were to compare the P/E ratios of any Layer 1, Layer 2, protocol, bridge, etc, they would be ridiculous compared to even meme stocks. If you’re curious on how cryptos can have P/Es, this would be a good place to start.

Crypto proponents liken our ecosystem to fast growing tech companies, which have to be unprofitable before they suddenly rake in the billions. Much like tech companies, however, the often go bust before any actual adoption occurs.

This leads to survivorship bias in businesses such as Tesla or Amazon, helped along by Elon’s twitter banter. Masses therefore flock to high beta stocks, praying for, and not calculating, their next 10x.

In the stock market, a total portfolio 10x was a generational occurrence before the fed decided to print 50% of total money supply in the last two years. In crypto, a 100x occurs everyday.

So why not gamble in the greatest casino of our time?

What would a left curver hold?

Cardano, Doge, Shib, a selection of L1s and whatever ponzis the class of 2024 brings.

Do these have sustainable tokenomics, a fundamental use case and are likely to change the future of finance?

Will they probably 10x off the lows?

You see, left curvers play the best kind of fundamentals in crypto – attention capture. During hype cycles, retail flocks en masse to whatever tokens influencers are shilling. Furthermore, these tend to have large circulating supplies, leading to “small prices”.

They are also the best kinds of maxis. Instead of congregating to a small community, they are generally very welcoming and encourage slowly accumulating their favorite projects. Be it DCA or lump sum, they still invest in whatever they believe in.

“Compound interest is the eight wonder of the world”

Cardano hodlers are accumulating their favorite token at $0.42 right now, earning up to 8% APY. Given it bounces back just to all-time-highs, that’s nearly an 8x.

And that’s not including the shitcoins.

Somehow, their lack of diversity becomes a strong point, instead of a weakness. The only hamartia I see, however, is their inability to sell. If left curvers can overcome this, they would become an unstoppable force.

I would like to say that I am probably a mid curve master.

However, after many crypto participants got burnt by low cap shitcoins, hacks, and Terra’s collapse, It is unfortunately likely that they become some form of maximalists. Whether Bitcoin, Ethereum, or the “ETH KILLERS”, they will pick one project and stick to it.

While there is nothing inherently wrong with that, I am personally invested in crypto because of the money technology. Becoming a maxi just means that you will be late to the next cycle’s narratives, and more often than not buy the top.

Mid curvers will probably also buy something like $LINK- the backbone of DeFi which managed to underperform every single money market token. Just because a project is good, does not mean you have to accumulate its ponzi token.

At the time of writing, I still somehow own link.

The statement “your downside is protected” is often used as a counter argument here. However, the intrinsic volatility within the market makes $BTC look more like bonds – a safe hedge against the overall market.

$BTC being 65% from all-time-highs also does not help this point. Taking profits to FIAT strongly and a more strategic allocation would likely be better here.

Personally, I’m not sure what right curvers do, but would love to speculate.

The way I see it, they are probably sat in cash, ready to deploy once macroeconomic conditions are met, or a certain key indicator they have is hit.

Funnily enough, this is not hard to do.

Many meme the Fear & Greed Index, as it is a lagging indicator of what we already know. After all, price and emotion are reflexive, and people become scared during sudden market crashes.

But buying in deep red and selling in deep green is sure to be profitable. Furthermore, the volatility of crypto means these ranges are often met.

A more “technical” way of doing this would be to use something like the Bitcoin Logarithmic Regression Band, which sets upper and lower bounds using price history. With it, we can cherry pick market bottoms and tops, deploying capital all at once instead of catching a falling knife.

Right curvers also typically have a strong network, which helps them keep a close ear to the ground. Be it the much hated Venture Capitalists, or individual angel investors, they often get approached early.

While we may not be approached the same way they do, creating networks and working with others is an invaluable resource.

However, even the biggest brains fail too.

3AC’s collapse is the most recent example of this. Their blind faith in Terra , creditors who lent massive uncollateralized loans, and no hedge in a manic bull market have led to the ongoing contagion.

While having a thesis is all well and good, loss aversion and greed lead to the downfall of many would-be great investors.

Let me reiterate. He was green barely 3/10 times, and managed to make more in 7 days than many make in a year. By building confidence in your system and removing emotion, we can take one step at a time towards the big brain club.

So Which Am I?

Unfortunately for many of us, keeping a ear close to the ground is hard, especially when you are still studying or work a full time job outside of crypto. Despite this, many fall into the trap of part time leverage trading and being too impatient.

Personally, I feel that I’m as room temperature as it gets, and always end up taking the most mid curve path.

As such, I’ve taken the highest leverage bet I could get – working in the industry. By learning from all sides of the curve, I hope that one day, I too will make it.