What Are The Differences Between OlympusDAO $OHM And Wonderland $TIME? APYs Explained 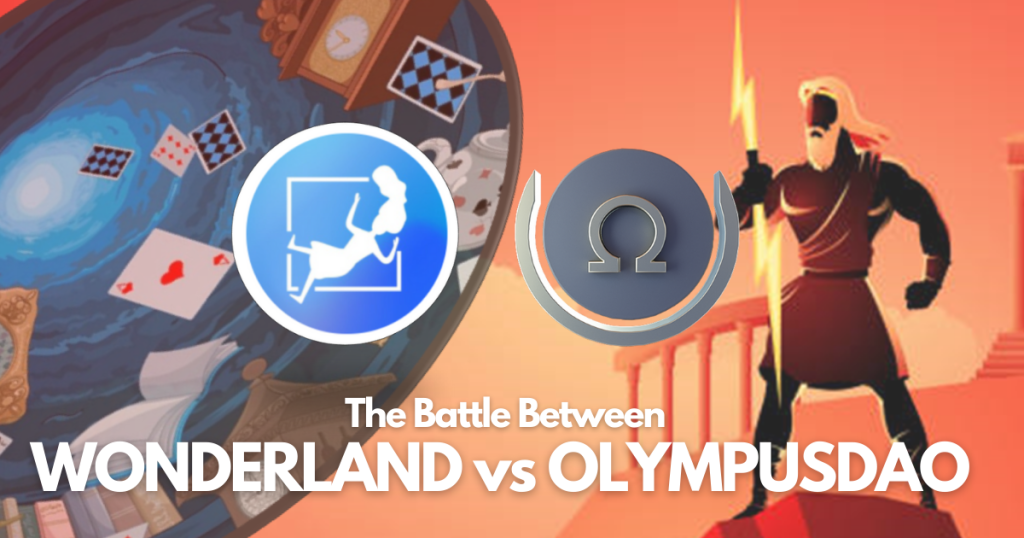 Behind the hype of the 4 to 5 figure Annualized Percentage Yield (APY), we will look through various aspects of these projects in its high yielding APY, Developers, Treasury and a few others.

We take a step deeper in understanding the differences as well as the uncanny resemblances between the Olympus $OHM and Wonderland $TIME.

The OlympusDAO is a DeFi protocol which aims to be the decentralized reserve currency in its space. Olympus is building a community-owned DeFi infrastructure which operates in the Ethereum Network with its native token $OHM.

At its core, it seeks to replace stable coins such as $DAI and $USDT as main modes of exchange in the blockchain.

OlympusDAO acts almost like a centralized bank but instead, backs their token value through a basket of cryptocurrency notably FRAX instead of FIAT currency.

Also Read: Understanding (3,3) – Is OlympusDAO The Future Of Cryptocurrency, Or Just Another Ponzi?

Wonderland is a decentralized reserve currency protocol built on the Avalanche Network.

It aims to also be a reserve currency built from a treasury of assets with its native token $TIME. As fork of OlympusDAO, each $TIME token is also backed by a basket of assets, notably $MIM, TIME-MIMLP tokens as well as wETH.

OlympusDAO and Wonderland’s main difference resides in the network they operate on. OlympusDAO operates on the Ethereum network which currently has 65% of all transactions on the cryptocurrency market.

Wonderland is built on Avalanche Network where transactions are faster and cheaper due to its lower gas fees. However, in the eyes of some investors, the Avalanche network might not be “tested and proven”.

On the Avalanche Network, users might even be able to buy already wrapped staked OHM tokens (based on liquidity), wsOHM, to avoid high gas fees on the Ethereum network. This would not work if for $TIME on the Ethereum Network.

The main developer of OlympusDAO is Zeus. Although publicly known on Twitter, his face reveal is yet to be anonymous.

As for Wonderland, developer Daniele Sestagalli is a publicly known figure who is seen at different events and interviews. He is also a well know for cryptocurrency on twitter and a founder of Abracadabra Money and Popsicle Finance.

He even dropped hints on developing a game on Wonderland inclusive of NFT rewards in an RPG style.

3. The Original OlympusDAO vs. Wonderland as a Fork

OHM is the first protocol who came up with the idea of decentralized reserve cryptocurrency along with the bond and staking mechanisms. In the other camp, Wonderland is just a fork of the OlympusDAO.

If you draw similarities with Bitcoin, where transactions are slow and expensive, OlympusDAO might not be the most practical project to be on the Ethereum Network with slower transactions speeds and high fees but it is the project founded and investors tend to be inclined to trust.

4. Treasury of OlympusDAO and Wonderland

The treasury of both projects are fairly similar here. Imagine the treasury having two doors, the first, an entry door where it would be able to receive profits and the exit door where profits are shared to users who stake within the platform as a reward.

So how does the treasury actually earn a profit? By selling bonds, the treasury offers users a discounted price of the bonds in exchange of LP token given to the treasury.

For example, if the price of $OHM is US$1000, the treasury will then offer a discount by selling you the $OHM token at US$960 if you can purchase it upfront with ETH.

On the condition that you will only receive the amount of $OHM you bought after a given time. After that given time, if the price of $OHM remains the same, you will be getting your $OHM at a 4% discount.

By receiving your ETH payment upfront, the treasury promises you that you will be able to get your OHM after a period of given time. The ETH received will strengthen the treasury as they would be able to mint new OHM tokens which will be distributed to users participating in staking as rewards.

However, Wonderland buys OHM tokens as part of its basket of cryptocurrency assets backing the $TIME token in its treasury. These OHM tokens in Wonderland’s treasury are also staked, auto compounding on the OlympusDAO project.

This could make treasury grow faster but possibly increases the risk when these tokens depreciate in value.

The 4 to 5 figure APY is crazy, but it is important to note that APY will decrease overtime, so with the risk of falling token prices. The DAO needs a strong stream of investors to invest and strengthen the project. This is where the high APY comes in, catching investors attention in takin the first step in investing in the project.

DAO (Decentralized Autonomous Organization) where owners of respective tokens have voting rights and power to decide on future steps of the platform, apparent in OlympusDAO.

Their reserve currency are put on the blockchain to be controlled by the public which are also backed by a basket of crypto asset. They utilize the concept of prisoners dilemma to achieve game theory incentives for all participating users.

However with Wonderland, there is a team behind the project who dictates the direction of the project.

We definitely need to approach investing in these projects with caution. It is still a mystery on who is behind OlympusDAO but on the other hand, the project lead of Wonderland, Daniel Sestagalli posses experience in the blockchain industry leading other projects such as Abracadabra and Popsicle Finance.

I would also be on the look out to see other developers and big players in the crypto industry speak more on these projects for better credibility and endorsement.

To wrap up, from my perspective, APY should not be the determinant factor in investing in these projects. Although the novelty of high APR might appreciate the price of the token in the short term, however, as more users lean toward staking on these platforms, rewards will get smaller and pose a possibility of stakers giving up their position.

Also read: The Difference Between A Market Cap And A Fully Diluted Market Cap In The Crypto World