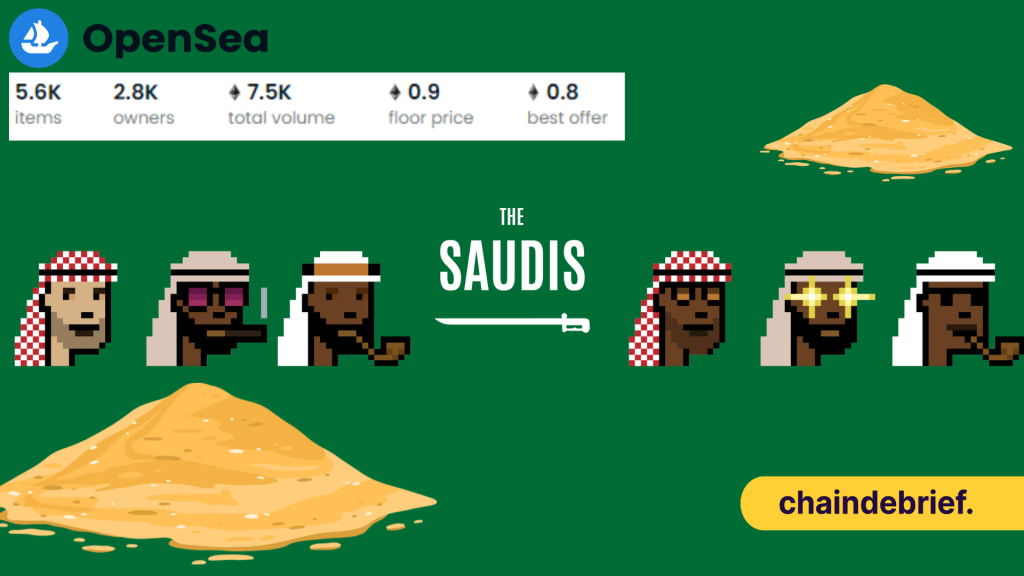 What is the Saudis NFT project?

The Saudis is a collection of 5,555 avatars in a 2D pixelated style similar to CryptoPunks. Each NFT in the collection is unique and algorithmically generated from over 80 traits. The NFTs are based on the Ethereum blockchain and give holders access to all the project’s upcoming venues.

The project is the latest addition to a string of free-to-mint NFT collections. While the collection is off to a promising start, how it fares in the coming months remains to be seen.  Nonetheless, this was “successful” as a free mint. At its highs, the floor price reached 1.1ETH with over 7,000ETH traded (~USD$7.5 Million at the time of writing).

They even became the second most traded NFT on Opensea over the past week, out-trading BAYC and MAYC. If you look carefully at the 8th highest traded NFT, you’ll also be brought to a project name of a relatively similar nature and objective.

Even nifty NFT investors are struggling to understand how such a project manages to take off amidst market uncertainty. What does this reflect for the NFT and crypto space as a whole? Just like Goblintown, The Saudis NFT may reflect some very strong lessons for investors in the space.

Rethink your idea of fundamentals

Why does anyone really want to own NFTs? What is its importance of it?

The “classic” interpretation is that Web 3.0 is of course, revolutionary and that most of the infrastructure and ecosystem are decentralized.

Therefore it is much better for the individual compared to ‘Big Tech’. We see this example in the case of NFT ownership. Why not just right-click and save the image, right?

Yeah, but you wouldn’t be able to own the asset on-chain, and neither can you trade it or have ownership rights/benefits decided by the protocol.

But yet, nobody really cares about this stuff, do they?

Let’s take a look – apparently, 82% of NFT buyers surveyed were motivated by… investment purposes a.k.a they are not in it for the tech.

In truth, most of us in the space are motivated not by ideals, but simply by profit. In fact, the popular saying in crypto goes,

It is not a surprise that those in the crypto space, and even “OG traders” also tend to have a history in poker – that’s right, some of the best in the space often use poker analogies and teach concepts like sizing bets, EV, and probabilistic thinking to earn as much money as possible in DeFi, NFTs, L1s etc.

So while people may be curious, puzzled, or even upset at not buying The Saudis early on free mint day, I think that it doesn’t really matter.

This is a clown market, valuations are absurd, and people take buying/selling advice from random people with anonymous profile pictures on Twitter, or listen to someone unironically called BitBoy on crypto.

There is something lighthearted about this collection yet still able to reveal the psychology of the crypto market. There is nothing this NFT collection provides as a utility for the bear market, maybe just a form of entertainment or just some sort of coping mechanism for those burnt.

It is impossible to unravel and comprehend the psychology of the NFT market, but one thing is for sure, fundamentals only have a small part to play. It seems a bigger proportion goes into crafting narratives and “least serious” ideologies, nothing contributing towards the development of the broader crypto market other than reflecting NFT’s current state of maturity.

But wherever there is money to be made, there will be people. People who are community jumpers, moving from one narrative to another, and maybe that’s how the NFT space operates right now, but probably not for long.

Do investors just want a reason to invest?

The project’s momentum is fueled by its “kingdom” of Twitter followers, many of whom create Saudi Arabia-inspired meme videos to fuel the project’s hype.

The pseudonymous (and at times offensive) founding team behind the project is just the latest in a string of free-to-mint, performance art-driven NFT projects of this nature.

“Attention is the only scarce resource in crypto.”

Goblintown is the most notable of the bunch, which did over $7 million in sales volume in its first weekend. The project kept its momentum going with goblin noise-filled Twitter Spaces and influencer partnerships, most recently taking over NFT.NYC with a slew of ghoul-themed parties.

LUNAtics were criticized as a cult and echo chamber, but as irrationality goes in the market, the community support for LUNA and the God-complex Do Kwon got pretty absurd, didn’t it?

Prior to the collapse and powered by how much attention it grasped over the crypto space, LUNA did do impressively well – an ATH of $119 and 40 billion in market cap in April 2022.

Walking to earn, another variation of unsustainable tokenomics has questionable fundamentals. But the novelty of introducing exercise into this scheme is of course, fresh. And fresh does go a long way in attracting attention, allowing for short-term success.

Also Read: I Earnt US$70 For 10 Mins Of Running With STEPN But This Move2Earn Model Might Not Work

So do free-to-mint NFTs work? In short, yes.

Free-to-mint NFT launches seem to be working just fine as The Saudis and Goblintown lay the groundwork for future NFTs projects to adopt. In fact, the first-ever NFT project, CryptoPunks, was minted for free on its release day.

However, regardless of how a project might be fundamentally unsound, there are always intangibles to consider. Viral marketing seems to thrive regardless of various market conditions in the short term, but faces roadblocks in being sustainable in the long run.

Of course, I want to reiterate that in the long run, if the attention and hype are not backed by strong fundamentals and utility, the project fails. Marketing draws investors in, but it is the fundamentals that keep the project going.

Also Read: Is GameFi Dead? What It Takes To Unlock The Next Wave Of Adoption