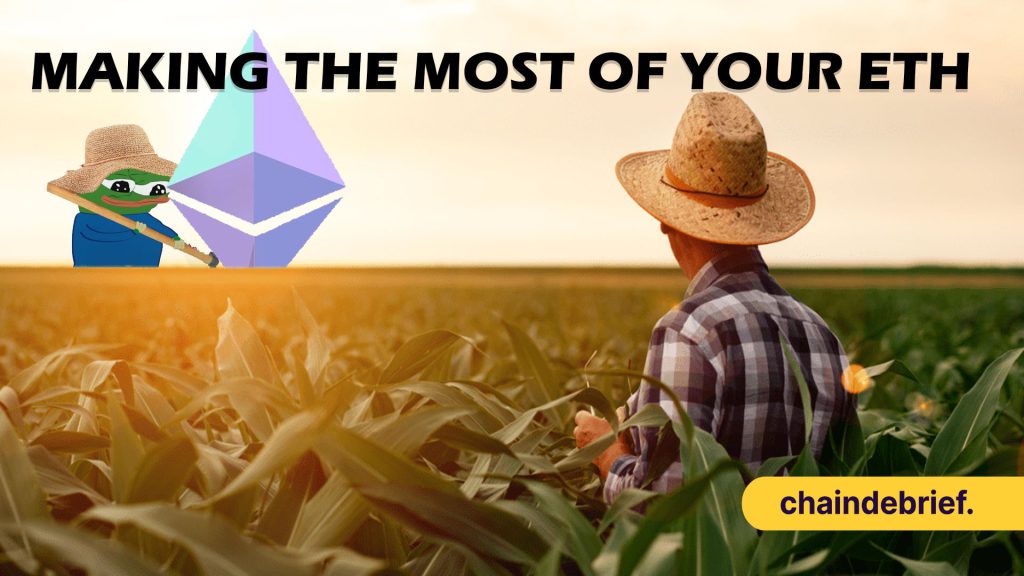 2022 was a tumultuous year to say the least. Not only did the combined cryptocurrency market capitalization fall from a whopping three trillion to just one, but many platforms – both centralized and decentralized, were wiped off the face of Web3.

While those who have managed to keep their portfolio intact can attribute that to careful risk management, one bull market theme still lingers in the mind of anyone looking to maximize their returns.

“Where is the best place to yield farm?”

With Ethereum comprising a majority of many portfolios, let’s explore some of the top yield farms, their APRs, and how secure they really are.

Also Read: Everything You Need To Know About The Upcoming Ethereum Shanghai Upgrade

Lido is a liquid staking solution that lowers the barriers to entry for Ethereum 2.0, allowing users to stake their $ETH with no minimum deposit.

Users will then receive $stETH as a receipt token, which automatically rebases to include both the initial $ETH stake value, as well as additional rewards gained by staking the Ether.

Lido charges a 10% fee on staking rewards, with 50% paid to validators and the other half paid to the DAO. The platform also a governance token, $LDO, which is used to vote on the DAO’s cashflows.

Risks: Aside from smart contract and DAO management risk, $stETH often trades at a discount to $ETH (as pictured above), due to fear and uncertainty in the markets.

Also Read: Ethereum 2.0 Staking Solution: What Is Lido Protocol ($LDO) And How To Stake Your ETH On It

Assuming you have long-term faith in Lido and $stETH, Curve is a great place to generate additional yield on ETH/stETh pairs. Curve Finance is a decentralized exchange much like Uniswap or Sushiswap, with $CRV being its native governance and Utility token.

Curve finds its niche in low slippage trading between, to, and from, stablecoins and blue chips thanks to its deep liquidity pools. In fact, Curve is the fourth largest protocol by Total Value Locked, and supports 12 Networks in total, including Polygon, Optimism and Avalanche.

With $122M in daily volume, Curve charges a 0.04% trade fee which goes to liquidity providers, and a 0.02% admin fee for the protocol.

You could also consider staking in the Tricrypto2 pool, which pays out ~ 10% APR. However, the TriCrypto pool is a bit more complex than the ETH/stETH pool, and has exposure to USDT and BTC as well.

Curve’s front end has been compromised before. However, this was discovered to be a flaw by their service provider, and liquidity pools were not at risk.

If you’re looking for an alternative to Curve Finance, automated Market Maker Balancer also has an stETH/ETH pool available. Currently the 12th largest protocol by Total Value Locked, Balancer currently accounts has grown from being 2% of all DEX volume in 2021, to 14% in 2023.

With a fixed swap fee of 0.04%, its innovative designs for liquidity pools have been an attraction for both liquidity providers as well as traders.

Risks: Smart Contract risk, stETH risk. Balancer was previously exploited for $500,000 in 2021 because of a flaw in its smart contracts.

Known as the ‘gateway to De-Fi’, Yearn is an Ethereum-based protocol that aims to build a holistic suite of financial products fully governed by the community. Yearn provides a one-stop solution for optimizing users’ yields on their cryptocurrency assets in an automated and decentralized fashion.

Users can stake their $ETH in Yearn, which will be wrapped into $wETH and deployed into one of the various strategies. You can find out more about the vaults at Yearn HERE.

The Protocol takes a 20% performance fee for its strategies. However, it charges 0 deposit and management fees for its services.

Yearn was also founded by Andre Cronje, who has been nicknamed the “Godfather of DeFi.”

Risks: Smart Contract Risk, Performance Risk, Third Party Risk (Yearn deposits assets in other DeFi protocols to generate yield). Yearn Finance was hacked for $11 Million in 2021, with the attacker using flash loans to exploit a flaw in one of Yearn’s vaults.

Aave is a lending and borrowing protocol powered by a Decentralized Autonomous Organization (DAO), which supports 7 different networks, including Ethereum.

Being one of the oldest protocols in DeFi, Aave is known for its reliability, having never been exploited in its long history – despite many attempts. Thanks to its legacy, it currently sits as the third largest protocol by Total Value Locked, at a whopping $4.63 billion dollars.

While yield on Aave has gone down due to the lack of borrowers, many still choose to stake on Aave, not only due to its historical reliability, but also the ability to borrow against their assets. This means you can quickly free up capital in times of need, without ever having to reduce exposure to $ETH.

$stETH can also be deposited on Aave, but it earns no additional yield. If you wish to avoid the hefty Ethereum Network fees, you can also lend $ETH on one of the other 7 networks, albeit at a lower yield.

One of the more innovative ways to earn yield on your Ether is Unslashed Finance, an insurance protocol for decentralized finance and institutions. Coverage is purchased by a user, and insured through capital provided by market participants.

Depositors can also choose between various pools, based on their risk appetite. Protocols that have used Unslashed in the past include Uniswap, Binance, and Ledger.

Users can also deposit into the “Spartan Bucket”, which provides coverage for multiple protocols, with the mix decided by Unslashed DAO.

Lido Finance has also purchased insurance from Unslashed to protect against a possible 5% slashing penalty for stakers on their protocol. Since their launch in 2021, Unslashed has sold over $400M of insurance products.

If you’re looking for 4 digit APRs and not yet turned away from the many bridge exploits last year, this may be the one for you.

Celer Bridge, created by Celer network, has slowly crept up to being the 8th largest bridge by Total Value Locked, with $135m locked up to serve as liquidity. Furthermore, it currently supports 25 different networks, including Metis and Aptos.

Thanks to liquidity mining incentives, there are currently multiple 3-digitAPR opportunities on some of the most popular networks. Despite a low base fee, depositors can earn additional incentives in the form of $OP on the Optimism Network and $CELR on all other networks.

cbridge has been audited by Certik, PeckShield, and SlowMist.

With the Waves blockchain rising in popularity towards the tail end of 2022, Vires Finance became their de-facto money market, allowing users to borrow and lend their cryptocurrencies with ease. While Waves’ notorious algo-stable $USDN has since depegged, Vires still remains a trusted money market, with over $200 million in Total Value Locked.

Surprisingly, there has been a lot of $ETH borrowing on Vires, driving interest rates upwards. Additionally, there is an optional feature to lock supply for 1 year, where depositors will receive an additional 6% APR in $VIRES tokens.

Additionally, users can borrow against their deposited $ETH in Vires, much like in Aave, in order to deploy their capital without losing exposure to Ethereum.

Risks: Smart Contract Risk, Oracle Risk, Liquidation Risk (For Lenders). Due to $USDN depegging, Vires previously had $500M in bad debt which has since been taken on by Waves founder Sasha Ivanov.

Convex Finance is a decentralized yield optimizer which helps users gain the benefits of Curve Finance’s veTokenomics without locking up their $CRV. Being the fifth largest protocol by Total Value Locked, Convex Finance was at the centre of the “Curve Wars” narrative last year.

On top of $CRV rewards, depositors also gain additional incentives in the form of $CVX, the platform’s native token. These can be used to earn a portion of platform fees, as well as to vote for additional yield on certain pools, with voters eligible for “bribes”.

While Convex has a variety of Ethereum pools, here are a breakdown of some more notable ones:

While the current climate of Web3.0 means that less and less people are holding their cryptocurrencies on centralized exchanges, it is unavoidable that some people will still use them due to their convenience.

Following the collapse of FTX, however, many centralized exchanges have gone on to create a “Proof of Reserve“, making all their wallet holdings transparent for users to view. While this does not mean that we should place our trust in them blindly, it does bode well for the future of Centralized Exchanges.

As for crypto.com, they offer up to 6% APR on Ethereum staking on up to $3,000 worth of $ETH. However, this requires users to stake more than $40,000 $CRO, which is not feasible to most. It also requires depositor to lock their stake for 3 months.

Changing the lock-up period to “Flexible” instead of 3 months also cuts the APR to approximately 0.2%.

While Yield Farming was all the rage during DeFi summer, it has since taken a backseat in this bear market due to widespread fear of on-chain exploits and liquidity concerns. Furthermore, we are far from the days where select protocols were able to offer 20% APY on “stable” coins, and 6 digit APYs on tokens that seemingly went up only.

However, an extra 5% passive yield on a sedentary token could make a huge difference in a portfolio, especially when the bull market returns. Participating in yield farms also helps users actively stay on-chain, which could be the first step to discovering new, exciting protocols.

Regardless, there is truth to the statement that going on-chain currently incurs more risk, and that should be a strong consideration for anyone looking to explore both Centralized and Decentralized Finance.

Also Read: How You Can Practice Safe CEX In 2023